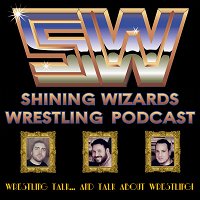 Its Monday, You Know What That Means

Another episode with the boys, we catch up on the Super Bowl, this and that, then dive into a discussion about Hulk Hogan’s Theme Songs, Real American vs American Made, then Tony hits us with Voodoo Child, its a fun conversation. A brief touch on some NWA news, before we are joined by CW Anderson

CW Anderson joins us to talk ECW, NWA, his matches vs George South, the WWECW, ECW Reunion shows, video games, and much more. A deep dive into a great talent

After CW, we jump in to AEW, Kenta and Rankings, lots of interesting talk before we move into the WWE world, and the recent releases, and upcoming shows on the Network.

We hit some news and notes for ROH, Impact, Who is Kevin Picking the Tag Match? and MLW, plus Tony watched MLW Fusion, find out what he thinks.

We talk some Butch Reed, before Kevin’s Top 5 List and Games