This week, I’m interviewing Adriana Hernandez from AdriPrints. Adriana is a creative entrepreneur whose business includes knitting design and font design. Adriana can be found online on the AdriPrints blog, Adri Makes a Thing or Two, Ravelry, Twitter as @adriprints, and Facebook. Her font collections, including StitchinCrochet, Stitchin Crochet Pro, and three variations of StitchinKnit, can be found on her MyFonts page.

We talk about her multi-faceted business, her crochet and knitting fonts, and Adriana’s tips for using her crochet fonts.

When Adriana relocated to Germany in 2008, she couldn’t bring her printing press. She started diversifying her business away from printed illustrations and began focusing on textiles. Her business currently includes many income streams, including knitting design and font design. (I interviewed Adriana about her knitting design earlier this month as part of my Hispanic Heritage Month series on the Underground Crafter blog here.) She began designing fonts because of her love of typography and lettering.

Adriana developed two crochet symbol fonts, StitchinCrochet and Stitchin Crochet Pro. When she designed StitchinCrochet, she assumed most designers/crocheters would use it with a vector drawing program like Adobe Illustrator. She even developed a series of YouTube tutorials demonstrating how to use StitchinCrochet with Illustrator to create a circular crochet motif pattern. (Watch the videos here: Step 1, Step 2, Step 3, Step 4, and Step 5.)

She later learned that most people were using the font with non-vector programs, and as a result, the symbols didn’t always scale properly. She made some updates to the font in Stitchin Crochet Pro to enhance scalability when used in non-vector programs, and also included symbols requested by users. Both fonts are available with five licensing options, with a price range from $3 – $40, based on your choice of license. (Most designers and authors would spend $8 or less for their licensing option.)

Although Adriana has developed several other fonts, she has only received feedback about her crochet fonts. She hears back from users about once a month. She wanted crochet chart design to be as accessible as knitting chart design, and she priced her fonts accordingly. Adriana receives only a percentage of each sale.

Adriana’s creative process requires that she understand how to create the stitch before designing a font glyph. For this reason, she hasn’t yet expanded her crochet font library to include symbols for Tunisian crochet or broomstick lace. However, she did love reading Renate Kirkpatrick’s Freeform Crochet and Beyond, which encouraged her to include bullion stitch and other symbols common in freeform crochet into StitchinCrochet.

When Adriana designed StitchinKnit, knitting pattern/chart software like StitchMastery and EnvisioKnit weren’t yet available. While there were other knitting fonts, she decided to create her own series – StitchinKnit Regular, StitchinKnit Chunky, and StitchinKnit Hand Condensed Thin – that appealed to her own aesthetic. All three versions are available with the same five licensing options as StitchinCrochet and Stitchin Crochet Pro, and the price for each ranges from $6 – $60, based on your choice of license. (Most designers or authors would spend $12 or less for their licensing option.)

Because there are many other knitting fonts on the market, Adriana feels her StitchinKnit series is really targeted at font connoisseurs or designers who are really drawn to the design aesthetic of the font.

For crochet chart designers, Adriana has some additional tips.

Adriana also recommends checking out her blog and tutorials before contacting her with questions about using her fonts, especially since she is currently on maternity leave.

Thanks for sharing your thoughts with us, Adriana! If you enjoyed this episode

The Creative Yarn Entrepreneur Show is no longer broadcasting. Episodes are available as a service to the yarn community. This episode originally aired in October, 2014. Be aware that content may be outdated.

If you'd like to chat with other yarn-related business owners, join the Creative Yarn Entrepreneurs Facebook group. Support Marie's work by buying one of her books, Make Money Teaching Crochet: Launch Your Business, Increase Your Side Income, Reach More Students (Amazon | Gumroad) or Design It, Promote It, Sell It: Online Marketing for Your Crochet and Knit Patterns (Amazon | Gumroad). 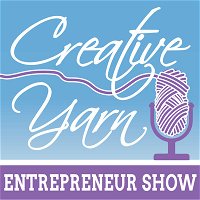 Next
Episode 9: Selling on Etsy, An Interview with Ijeoma Eleazu from the Etsy Conversations Podcast
← See all 67 episodes of Creative Yarn Entrepreneur Show