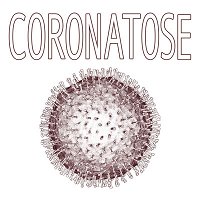 I love Star Wars but I refuse to say some shit like "May the fourth be with you!" It makes me think of the time I played with MC Frontalot at Local 506 and the place was packed with all his nerdy ass fans and my group Pink Motor Monsters (which was pretty nerdy too, I feel) was opening and we were getting ZERO love and then I dropped the line "your Han Solo gear is the hipster type / you won't join the dark side, your sister might" and everyone wents nuts for like three seconds and then immediately went stoic again.

This is our tenth OFFICIAL episode of Coronatose and in the intro I say we've only been doing this a little over a month but it's actually been closer to two whole months! This shit is so much work so if you are listening THANK YOU THANK YOU THANK YOU. Having fun conversations with people is one of the best things in the world. Editing podcasts is one of the worst things in the world. And never the twain shall meet. Except they do. Here. On Coronatose. My white whale.

I wanted to celebrate it with a bang so I decided to call my favorite cool dad who doesn't have dad bod, Scotty Boombox. This guy is a true "the man, the myth, the legend" type. We've shared so many laughs and definitely done and seen things together that I wish I could speak on publicly, but alas, I cannot. Perhapseth one day. But we've been talking about him making an appearance since the inception of the show and I wanted us to save ourselves till the tenth episode to give us something to look forward to.

From saving a celebrity baby's life to displaying his incredible voiceover skills to breaking down his patented-and-published theory of "Poo-Poo Per Household" physics, this is yet another classic convo with another classic human. And I'm lit and ready to stomp all over all the great stuff he has to say, which is classic me. The whole shit is classic! CLASSIC!! But not classy. Y'all ready for this??

Our outro music is "Too Much Video Tape" by Scotty Boombox feat. Juan Huevos

This podcast uses Transistor.fm for stats. Learn more on this podcast's About tab.