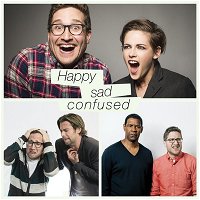 It's a movie musical trifecta on this edition of "Happy Sad Confused"! Hugh Jackman returns to the show and this time he's brought some very talented friends, the Oscar/Grammy/Tony winning team of Benj Pasek and Justin Paul. All three are basking in the glow of their hugely successful original movie musical, "The Greatest Showman".

Despite a soft initial opening and divided critics, the audiences have spoken and they love this film to the tune of nearly $400 million worldwide. In this conversation the trio talk to Josh about the film's unlikely trajectory, what they'd like to do with the material next, and why a superhero musical may not be such a bad idea!