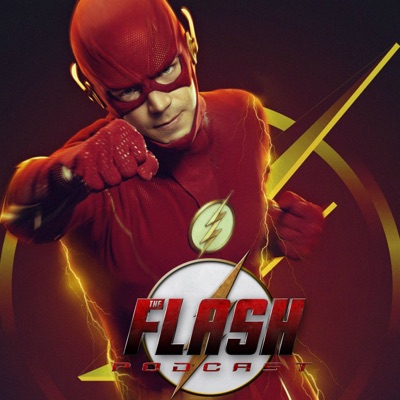 The Flash Podcast
Subscribe to this podcast
The Flash Podcast, the Internet's 1st Flash TV Podcast, is dedicated to The CW's hit series, The Flash, a spin-off show from Arrow. Each week the hosts give an in-depth analysis of every episode while covering the latest news about the TV show and the Arrowverse as well as take listener feedback about each individual episode. The Flash, airing Tuesday nights at 8/7c on The CW, stars Grant Gustin as Barry Allen a.k.a. The Flash and is executive produced by Greg Berlanti, Sarah Schechter, Geoff Johns, and Eric Wallace. "The Flash", all the logos and images are trademarks of DC Comics. The podcast is not sponsored or affiliated with DC Comics, Warner Bros. TV or The CW.
#40 in TV Reviews
Website
RSS
© Andy Behbakht, Tatiana Hullender, Breeze Riley & Lacy Baugher
Episodes
← View all episodes On this week’s episode of The Flash Podcast Season 5.5, Andy, Tatiana, and Breeze are joined by Mike Cecchini, Editor-in-Chief of Den of Geek, to continue their 3-part Crisis on Infinite Earths series leading up to the season six premiere of The Flash. In the second installment, they review the Crisis on Infinite Earths comic book by Marv Wolfman and George Pérez. Throughout the review, the gang breaks down the book from the characters to the overall story.

What did they think of the Monitor and the Anti-Monitor as the two central figures of the book? What were their biggest favorite moments in the storyline? With Wolfman wanting to use this story to make comics more friendly to new readers, did the story accomplish that? Last but not least, is this the right time for the Arrowverse to adapt this iconic storyline for this year's crossover? That and more on this week's episode of The Flash Podcast!

"This is the story that changed the DC Universe forever. A mysterious being known as the Anti-Monitor has begun a crusade across time to bring about the end of all existence. As alternate earths are systematically destroyed, the Monitor quickly assembles a team of super-heroes from across time and space to battle his counterpart and stop the destruction. DC's greatest heroes including Superman, Batman, Wonder Woman, Green Lantern, and Aquaman, assemble to stop the menace, but as they watch both the Flash and Supergirl die in battle, they begin to wonder if even all of the heroes in the world can stop this destructive force."