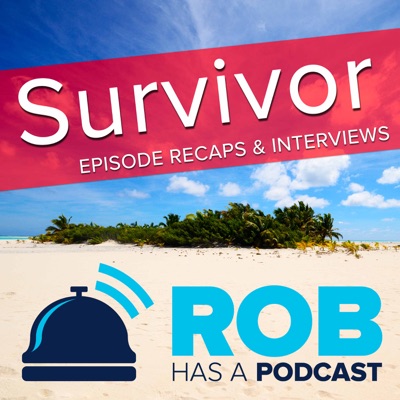 Survivor Island of the Idols Interviews and Recaps hosted by Survivor Know-It-Alls, Rob Cesternino & Stephen Fishbach
Subscribe to this podcast
Survivor: Winners at War Recaps and Interviews hosted by former Survivor Rob Cesternino
#29 in After Shows#189 in TV & Film
Website
RSS
© Rob Has a Podcast
Episodes
← View all episodes Why ____ Lost Survivor 38 Episode 9 RHAPup with David Bloomberg & Jessica Lewis
|
76 min
Download
Add to queue
Copy URL
Show notes
David Bloomberg & Jessica Lewis on Why this Week’s Voted Out Season 38 Players Lost Survivor Edge of Extinction.
Each week this season on our Survivor Podcast, David Bloomberg & Jessica Lewis will talk about why each voted out player “lost the game”. For more on David’s rules of what David’s Survivor rules are, listen to our “What Hero, Healer, and Hustler Survivors Should Have Learned”.
This week, David Bloomberg & Jessica Lewis talk about the reasons why Julia Carter lost Survivor Edge of Extinction, Season 38.
Julia came into this episode, and seemingly this Tribal Council, in good position. But a few wrong words served as a spark and the fire kept burning hotter until her game went up in flames. Was it all because of what happened in that crazy Tribal Council, or was there a larger issue that should have been addressed beforehand? David and Jessica figure it all out as they determine Why Julia Lost.
To review the short version of David’s Rules, here is the quick version:
Rule 1: Scheme and Plot
Rule 2: But Don’t Scheme and Plot Too Much/Keep Your Scheming Secret/Don’t Backstab Until You Absolutely Need To
Rule 3: Be Flexible!
Rule 4: Don’t Let Your Emotions Control You
Rule 5: Pretend To Be Nice/Play the Social Game (and Keep Your Politics and Controversial Beliefs To Yourself)
Rule 6: Don’t Be Too Much of a Threat
Rule 7: Know How to Deal with Idols and Advantages
Appendix A: Make Your Votes Count – Keep in Mind Your End Goal
Appendix B: The Jury Phase
——
Join us again next week when we discuss the next player voted out of the game.