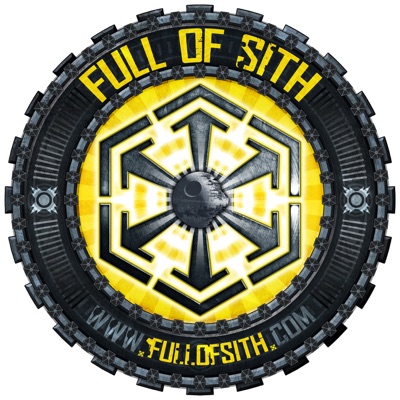 Tha Mike Pilot, Bryan Young and Holly Frey
Subscribe to this podcast
Full of Sith is a show dedicated to bringing the most interesting Star Wars conversations in the galaxy. Aside from breaking news in the world of Star Wars and interviews with some of the biggest names in the galaxy, we talk the philosophy and influence of Star Wars just as readily as the deep mythology it represents. Hosted by Tha Mike Pilot (Mediocre Show, Obviously Oblivious, The Awful Show), Bryan Young (Author, Filmmaker, Contributing Writer for StarWars.com) and Holly Frey (Stuff You Missed in History Class, Fauxthentic History). It's your mandatory dose of weekly Star Wars talk. * iTunes top 10 TV & Film | ** iTunes New & Notable | *** iTunes Featured Podcast
Website
RSS
© copyright 2013-2019 fullofsith.com
Episodes
← View all episodes

Full of Sith proudly presents this two-part podcast miniseries on the score to Solo: A Star Wars Story, focused on the music composed and created by John Powell, featuring original and new themes by John Williams

Part two of this miniseries focuses on action music in film scores, Powell's unique approach to composing it, and the multiple uses of pre-existing themes and motifs throughout Solo, both as inspiration for his new work and through variations on the old Star Wars standbys.

Music in this episode includes:
Larger than Life (Captain America: Civil War)
Origins (Thor: The Dark World
Captain America March (Captain America: The First Avenger)
End Credits (The Avengers)
Warrior Falls (Black Panther)
Why So Serious (The Dark Knight)
Drink Up Me Hearties (Pirates of the Caribbean)
Reminiscence Therapy
Train Heist
Krennic's Aspirations (Rogue One)
The Imperial March (The Empire Strikes Back)
Into the Maw
L3 and Millennium Falcon
Ben's Death and TIE Fighter Attack (Star Wars)
Into the Superstructure (Return of the Jedi)
The Battle of Crait (The Last Jedi)
Forbidden Friendship (How to Train Your Dragon)
A Man of Constant Sorrow (O Brother, Where Art Thou)
Chicken in the Pot
Lapti Nek (Return of the Jedi)
Duel of the Fates
Marauders Arrive
Flying with Chewie
Dice and Roll/End Credits

Includes excerpts from the video essay "The Marvel Cinematic Universe" by Every Frame a Painting (Taylor Ramos & Tony Zhou), Solo: A Star Wars Story, and Star Wars: The Force Awakens.

If you haven’t already, join our new Facebook group and join in the discussions with us and other listeners at – http://facebook.com/groups/FullofSith

If you like the show, please leave us iTunes/Stitcher reviews and share us with your friends and family! We’d greatly appreciate it.