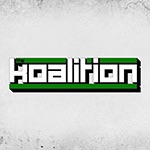 The Koalition
Subscribe to this podcast
The co-op podcast features discussion of everything games as well as a few choice words on various other subjects.
Website
RSS
© Copyright TheKoalition.com
Episodes
← View all episodes

The E3 2013 conferences are just five days away, and the gamer buzz is at an all time high. There's currently so many rumors and speculations going around that it's difficult to tell truth from false right now, but at least we still have our own predictions and expectations.

Listen as we go through each of the main companies (Nintendo, Sony and Microsoft) and speak on what we expect from each of them. What new games will be shown? What will we learn about the Playstation 4 and Xbox One? Who will have the biggest megaton? These are the questions that gamers are asking themselves to better judge which company will come out of E3 in the best shape.

But in the end we should all remember that no matter what happens at E3, gamers will be victorious. We feel that this is going to be the biggest E3 yet, with tons of 'Holy Shit' moments to keep us excited. It's best to not ponder on the console war too much, and instead focus on the quality of the games themselves, because in the end that's all that matters.

The Koalition will be having a presence at E3 this year; with myself, Richard Bailey, Edward Velazquez and Jennie Bharaj all present. Be sure to follow our Twitter, Like our Facebook page and check the site constantly to get exclusive updates from us. We hope to do multiple Co-op podcasts and possibly some Google Hangouts while we're out in L.A.