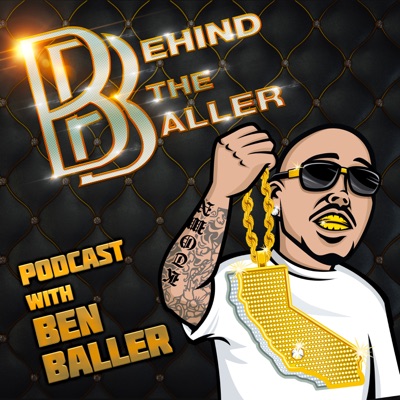 Behind The Baller Podcast with Ben Baller

Ben Baller
Subscribe to this podcast
His name is Ben Baller not Ben Humble. World Renowned Jeweler to the Stars, Former Music Executive, Entrepreneur, Family Man & Trash Talker Extraordinaire is now here on the microphone where he belongs. The CEO & Founder of IF & Co. Custom Jewelry and VVS Pens will provide you with deep insights as to who he really is. This is exactly what he was meant to do. This is Behind The Baller Podcast with Ben Baller. Subscribe to hear new EPs every Monday, Thursday & whenever we want to say what needs to be said.
#13 in Entrepreneurship#101 in Business
RSS
© London Ryder Kaia inc.
Episodes
← View all episodes

EP 15 - Kareem “Biggs” Burke (Co-Founder of Roc-A-Fella Records) + Heading to Tokyo For The Murakami Jewelry Collab, Gold BB Money Counter & more
|
86 min
Download
Add to queue
Copy URL
Show notes
Today’s episode is brought to you by @klekt
Welcome to Behind The Baller Podcast with Ben Baller aka The Forrest Gump of Hip Hop. Up top he’s here to discuss: Dealing with sick kids, Being back from Vegas, Heading to Tokyo, bathroom blowup at The Beverly Center, picking up a Murakami x Ben Baller collaboration, Thanks to Cousin James, All Gold BB money counter on NTWRK, Klekt Giveaway & more. Then it’s an honor & a privilege to have Kareem “Biggs” Burke (Co-Founder of Roc-A-Fella Records) in the Million Dollar Man Cave to discuss: Knowing each other for 25+ years, Being from Harlem, New York & all the, Paid in Full, Meeting Damon Dash & Jay-Z, Jay-Z vs. DMX in 1994, Initial investment into Roc-A-Fella, Jay-Z & Big L, going to Middle School with him, Roc-A-Fella was about to sign Big L, The Power of The Label, Mentality during the rise and not enjoying the fame, Leaving Priority Records, Kanye West signing with Roc-A-Fella & championing his first Two Records, Top Moments at Roc-A-Fella, Who invented the term Culture Vulture, Roc-A-Fella chains, The difficultly of fashion & Roc-A-Wear, going to prison on conspiracy & reflection, NFL & Jay-Z, Business Advice & the journey, The difference between a businessman and a hustler, his film O.G., some personal Ish & more. Then Ben comes back with the outro to discuss: How important it is that this information travels down to the younger generation, registering to vote, the best beef in the world & a whole lot more. Produced by: The Dust BrothersMusic by @lakeyinspiredAvailable on all Podcast Platforms, YouTube & BehindTheBallerPod.comBehind The Baller Theme Music Artist: Illegal Kartel (@illegal_kartel_mikal_shakur)Produced by: Gene Crenshaw(@yuyuthemaker)
15
15
0:00:00 / 0:00:00