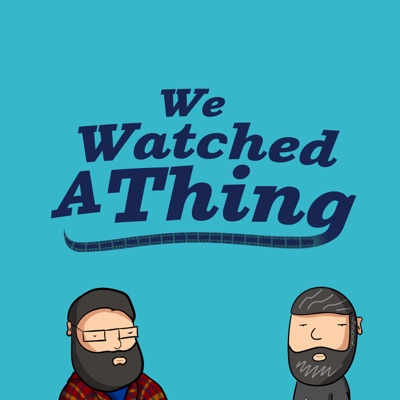 We Watched A Thing

Billy and Topher
Subscribe to this podcast
Join best friends Billy and Topher, a visual effects artist and a cameraman, as they catch up and deep dive on a film they watched that week.With a wealth of film knowledge, a love of cinema, and a humorous style, find out what we've watched this week, and what we thought about it.If you like this podcast, or hate it and us and want to tell us so - You can reach us at wewatchedathing@gmail.com, and find us at http://www.wewatchedathing.com
Website
RSS
Episodes
← View all episodes Welcome to Episode 49 of We Watched A Thing.

This week comes another patreon directed episode, so join us as we become bumbling, yet charming fools, open a bookshop that nobody wants, or needs, and fall in love with a celebrity, while discussing the 1999 rom-com 'Notting Hill'.

Notting Hill is a 1999 romantic comedy film set in Notting Hill, London, released on 21 May 1999. The screenplay was by Richard Curtis, who had written Four Weddings and a Funeral (1994), and the film was produced by Duncan Kenworthy and directed by Roger Michell. The film stars Hugh Grant, Julia Roberts, Rhys Ifans, Emma Chambers, Tim McInnerny, Gina McKee, and Hugh Bonneville.

If you like this podcast, or hate it and us and want to tell us so - You can reach us at wewatchedathing@gmail.com

If you really like us and think we’re worth at least a dollar, why not check out our patreon at http://patreon.com/wewatchedathing. Every little bit helps, and you can get access to bonus episodes, early releases, and even tell us what movies to watch.