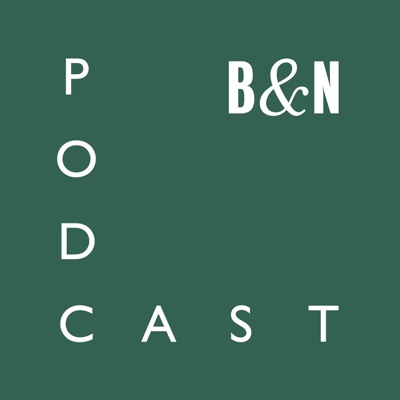 Barnes & Noble
Subscribe to this podcast
Every author has a story beyond the one that they put down on paper. The Barnes & Noble Podcast goes between the lines with today's most interesting writers, exploring what inspires them, what confounds them, and what they were thinking when they wrote the books we’re talking about. Subscribe to discover intriguing new conversations every week.
#111 in Books
Website
RSS
©1997-2017 Barnes & Noble Booksellers, Inc. 122 Fifth Avenue, New York, NY 10011
Episodes
← View all episodes If you've listened to the B&N Podcast  you know that every episode we take a kind of a deep dive into one writer's book -- the world they explore, the story they have to tell, and how their own experiences and struggles have fed their story.

But there are some writers whose effect on us is so big that talking about a single book seems like it just cracks the door open into a world that's begging to be explored in real depth. Writers whose creations have escaped the boundaries of any one story, or even the world of a series, and whose imaginations have become tangled up a little with our own.

When Stephen King's Carrie arrived in 1974 readers couldn't have known that the creator of that gripping story of small-town cruelty and unspeakable revenge would go on to be the single most influential fiction writer of his time. But from 2019 that impact is unmistakeable.
It's not just that books like Carrie, The Shining, It and Misery became both blockbuster books and enduring stories on the screen. King uses tales of horror and often the supernatural to take us on journeys into the emotional and material everyday lives of his characters -- and the style and atmosphere that we've grown to find characteristically Stephen King now seems like it's part of our cultural DNA.

With a new Stephen King novel The Institute coming in the fall, we thought, why not spend time this summer going back to the beginning, and working our way through the amazing bookshelf filled with worlds that King has given us over the years. We asked two wonderful writers and Stephen King fans -- the novelist Liz Braswell and the journalist Louis Peitzman -- to join us on a quest into the heart of King's own magical shadow country. We'll be releasing episodes of KING OF THE DARK as a special weeky series within the B&N Podcast, working chronologically through Stephen King's biggest books all summer long. And along the way we're going to be talking with special guests who have stories to tell about how their own voyages into King Country have shaped them as writers and as people.

To begin, we had to start at the beginning. And we had to go back to the scariest place that I can imagine having return to. High school. And Carrie.