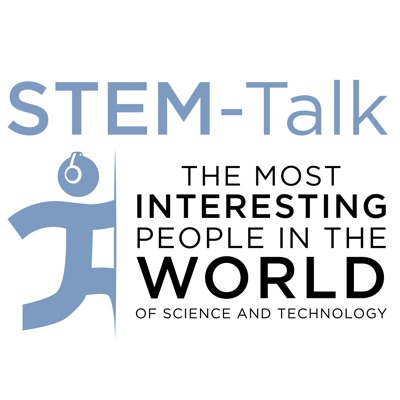 Episode 22: Dr. Kerry Emanuel Discusses Hurricane Prediction and Projection
Download
Add to queue
Copy URL
Show notes
Hurricanes are a leading source of insured losses, and a major cause of human and economics loss in the world. But from an insider’s view, they are also breathtakingly beautiful. Dr. Kerry Emanuel, a leading hurricane expert, compares flying into the eye of a hurricane to being inside a white Coliseum, thirty to forty miles wide, with walls resembling “a cascade of ice crystals.”

That’s just one of the fascinating tidbits from this episode of STEM-Talk, with Dr. Emanuel, whom Time Magazine named as one of the 100 most influential people in 2006. The following year, Dr. Emanuel was elected a member of the U.S. National Academy of Sciences.

He is a professor of meteorology at MIT, where he also completed his Ph.D. When he returned to teach there, he taught a course in meteorology of the tropics, and discovered that the existing theory of hurricanes was partly wrong. He’s spent the better part of his career disproving that theory and coming up with better theories of hurricane development and progression.

His recent lecture at IHMC is entitled “Hurricane Risk: Past, Present and Future”:  http://www.ihmc.us/lectures/20160324/

STEM-Talk Host Dawn Kernagis interviews Dr. Emanuel about his career, the future of climate change and its impact on hurricane development, and the future of hurricane projection and prediction.

1:11: Ken Ford mentions that he met Kerry in 2005-06 when Ford was on the National Science Board’s Hurricane Task Force, which he co-chaired with Kelvin Droegemeier (also a previous STEM-Talk guest: http://www.ihmc.us/stemtalk/episode-13/). That NSF report was entitled “Hurricane Warning: The Critical Need for a National Hurricane Research Initiative: http://www.nsf.gov/nsb/publications/2007/hurricane/initiative.pdf

2:24: Ken reads a 5-star review from “Wheelsuker”: “I’m not always curious, but when I am, I love STEM-Talk, and the deeply learned folks at IHMC. Subjects range from human physiology to the exploration of space, with thoughtful and probing questions that simultaneously teach and entertain. Highly recommended subscription.”

5:05: Kerry says his older brother told him that as a toddler, Kerry would get excited about thunder storms at home in Ohio.

6:08: His academic interest in science, and weather, developed in high school: “I started reading more professional meteorology books in high school; I got interested in physics and math. By the time I went to MIT [as an undergraduate], I realized you could put those things together.”

6:33: Kerry describes his academic journey: “I was an undergraduate at MIT, and I also did my Ph.D. there in 1978. Then I went and taught at UCLA and was there for three years. I came back to MIT, and I’ve been there ever since.”

7:35: The existing theory didn’t pay any attention to transfer of energy from ocean to the atmosphere. “Ironically, earlier scientists thought that was the guiding principle.” He picked up where they left off.