Verge of Discovery
Evgeniy Shishkin - interviews with the experts in science and technology fields.
Episodes
About
Reviews
Charts
Promote 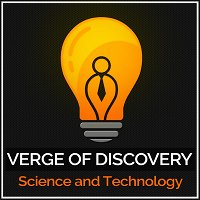 Evgeniy Shishkin recaps new discoveries in Science and Tech for the month of September 2015.  Topics include wormholes, number of trees in the world, oldest message in the bottle, cell phone usage, mountain McKinley vs Denali and 7 habits that can make you smarter.  Episode is concluded with a question of the month an the recap of this months episodes.

Next
010: Plastic Solar Cells, Self-Assembly and Nano-tech with Dr. Sarah Tolbert
← See all 47 episodes of Verge of Discovery