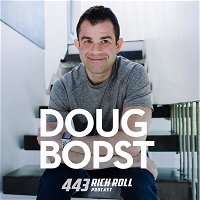 Admittedly, It's a thrill to converse with renown experts, world-class athletes and celebrities.

But the most rewarding aspect of my job is occasionally turning my spotlight on the everyman — relatable people who have conquered adversity to reinvent themselves wholesale, all in relative civilian anonymity.

These people are a gift. Amplifying their stories isn't just an honor. And it isn't just my joy. I see it as a responsibility.

Through these individuals we are better able to see ourselves. Their weaknesses, struggles and strengths mirror our own. Their relatability uniquely qualifies them to reflect back upon us our shared, collective humanity. In their victories we can connect more viscerally with our own inner power and potential.

Today it's my privilege to share yet another such story. This is the tale of Doug Bopst – an essentially normal kid who, like so many, suffered in silence from depression. To self-medicate he began experimenting with drugs in his teens. Smoking pot quickly evolved into a heavy opioid addiction. A day in the life involved snorting several hundred milligrams of OxyContin, complemented by a pack of cigarettes and the occasional cheesesteak. No exercise. No interest in maintaining relationships with anyone who didn't do drugs. No self-confidence. And no care for tomorrow.

At 21, it all came to a head. High on opiates and on his way to make a drug deal, a cop pulled Doug over for a broken taillight. The officer found $2,000 in cash plus half a pound of marijuana under the spare tire in the trunk. Promptly arrested on a felony drug charge, Doug ultimately served 2 months in jail.

It was hardly the harshest sentence. But it was more than sufficient for Doug to hit bottom. Reflect on his errant path. And commit to an entirely new life. A life redeemed by sobriety, faith, fitness and family.

I was initially introduced to Doug through my friend Amy Dresner (another sober warrior you may remember from episode 341) and knew immediately I wanted him on the show.

In fairness to Doug, his story isn't entirely that of the anonymous everyman. Now an award-winning personal trainer, author, and public speaker, his saga has been covered by a variety of media outlets, including The Today Show. But the press intrigue is driven by Doug's innate relatability. And I’m fairly confident this conversation is the most complete chronicle of his life and redemption to date.

This is a conversation about what it was like, what happened and what it's like now. We cover the low lows. Hitting rock bottom. And exactly how he was able to conquer his demons and put the past in the rear view.

It's about the power of sobriety. Leaning on mentors. And how a love of fitness, spirituality, and putting service service first returned him to sanity.

All told, it's a story of redemption full stop — and I’m honored to help tell it.

The visually inclined can watch our entire conversation on YouTube at: bit.ly/dougbopst443 (please subscribe!) and the podcast is of course available on Apple Podcasts and Spotify.

I sincerely hope you enjoy the exchange.