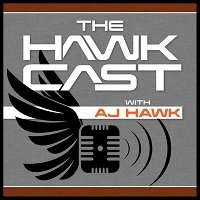 Dean is a football rules analyst for the NFL and college football games on Fox Sports. He previously served as the NFL’s Senior Vice President of Officiating from 2013 to 2017. In May 2018, Blandino took on an additional role, as director of instant replay for NCAA football. He was also the Executive Producer of the Her Turf documentary film which showcases 3 female football officials.

Next
E163: Larry Lawton – Ex Gangster and Reformed Jewel Thief
← See all 150 episodes of The HawkCast with A.J. Hawk