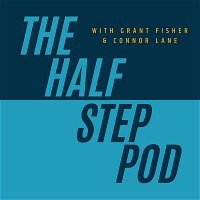 On Episode 22 of The Halfstep Pod, Grant joins the Pod after placing 5th in the 10k at the Olympics, the best finish over that distance for an American man not named Galen Rupp since Frank Shorter in 1972. The guys do a brief recap of the race, including the keys to Grant's composure running in the lead pack in his first Olympic race, how he maintained belief that he belonged up there, and just who exactly he was giving the double thumbs up to after his historic race finishing 2.5 seconds out of the medals.

We'll be doing a more in depth recap of the 10k and the upcoming 5k after the Olympics, right now, Grant needs to move forward in preparing for his 5k prelim in a couple days so we didn't want to linger too long on this one, despite the incredible result.

Thanks to everyone for listening ! Please continue sending us your listener questions (halfsteppod@gmail.com) or DM us on instagram! Be sure to rate us and subscribe if you haven't already in order to get our podcasts as soon as they drop!

Previous
Episode 21: Live From The Village, Tell Me About Your Bed...