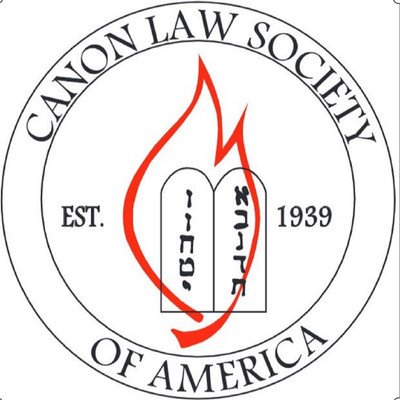 One of the most pleasant moments of the Annual Convention of the Canon Law Society of America is the announcement and conferral of the Role of Law Award.

According to number 15 of The By-Laws of the Canon Law Society of America, the specific duty of determining the recipient of the Role of Law Award is assigned to the Board of Governors.  The By-Laws do not specify the process, but the criteria to be observed in selecting the recipient are clearly established: (1) Embodiment of pastoral attitude, (2) Commitment to research and study, (3) Participation in development of law, (4) Response to needs of practical assistance, (5) Facilitation of dialogue and the interchange of ideas within the Society and with other groups, (6) The recipient shall not be anyone currently serving on the Board of Governors.

The process by which the Board of Governors makes this selection is done thoughtfully and prayerfully.  It is a time for the Board of Governors to take stock in the good work that is done by so many of you, the members of the Canon Law Society of America.  This moment in which the Role of Law Award is conferred is a time for all of us to reflect on our dedication to the purpose of this society as expressed in the very first sentence of our Constitution:

We, the members of the Canon Law Society of America, ever eager to fulfill our role in the Church through the proper use of canon law, hereby proclaim our desire to promote every method of serving God’s people that comes under the concept of law.

While this purpose and dedication pertains to all of us, each year we have the privilege of recognizing one member of the Canon Law Society of America who has been and continues to be ever eager to fulfill that role in the Church.  I thought of sharing the identity of this year’s recipient at the very outset, but I was advised that the proper protocol is to save it to the end.  However, I am sure that you will quickly know the name once you have heard a just few highlights of this person’s life and ministry.

The recipient of the 2004 Role of Law Award is a cleric and a member of an institute of consecrated life.  He was born in Fort Smith, Arkansas on November 29, 1929.  He made his first vows as a Missionary Oblate of Mary Immaculate in 1950 and was ordained to the priesthood in 1956.

He has held a number of positions in his religious community, including professor of moral theology and canon law at the Oblate Scholasticate in Pass Christian, Mississippi from 1957 to 1965.  He was associate pastor and then pastor of St. Patrick Parish, McCook, Nebraska from 1965-1969.  From 1969-1975 he was director of the National Shrine of Our Lady of the Snows in Belleville, Illinois.  He was provincial superior of the Central United States Province of the Missionary Oblates of Mary Immaculate in St. Paul, Minnesota from 1975-1981 and director general of the Missionary Association of Mary Immaculate and secretary of the Oblate Sharing Fund at the O.M.I. Generalate in Rome from 1981-1986.  The missionary dimension of his religious life is also reflected in his appointment to the Congregation for the Evangelization of Peoples by Pope John Paul II, where he served as a consultor from 1985-1993.

This breadth of experience in pastoral duties and religious life added a unique dimension to his role as professor of canon law at St. Paul University from 1986-2000.  He was likewise well-prepared for the role of professor by his own studies.  He received licentiate degrees in philosophy and canon law from the Pontifical Gregorian University in Rome and a doctorate in canon law from the Pontifical University of St. Thomas Aquinas, also in Rome.  He later obtained the Diploma of Advocate for the Roman Rota after completing the course at the Studia Rotale.

Our recipient has always been ready to share his knowledge of the law not only in the classroom, but through his writings.  He is the author of numerous articles published in The Jurist, Monitor Ecclesiasticus, Newsletter of the Canadian Canon Law Society, Pastoral Sciences, The Priest, and Studia Canonica.  He has authored or edited several books including his doctoral dissertation, The Missionary Oblates of Mary Immaculate: A Clerical Religious Congregation with Brothers, first published in 1984, with a revised edition published in 1995.  Many of these works have been translated into other languages and published simultaneously in various places around the world, especially for the benefit of the Church in developing nations.  His writings touch on a variety of topics including marriage jurisprudence and procedures, sacraments, clergy issues, and penalties.  His publications are always a treasure-trove of English translations of all sorts of Papal and curial documents.  This individual has gone beyond the classroom and print media in order to educate others in the field of canon law.  His first effort with electronic media was a CD-ROM version of the 1956-2000 volumes of Canon Law Abstracts.

It appears that when our recipient was named professor emeritus in the Faculty of Canon Law at St. Paul University in 2001, he ignored the fine print of the decree which indicated that he was retired.  Instead, he accepted the invitation of the Cardinal Archbishop of Chicago to serve as associate episcopal vicar for canonical services and promoter of justice in the Archdiocese.  If that wasn’t enough, he has continued to research in new areas and to update some of his earlier works, always looking for additional information and jurisprudence to share.  Since the promulgation of the USCCB, Charter for the Protection of Children and Youth and the corresponding Essential Norms, he has offered his assistance in educating and advising canonists, bishops, and religious superiors in the proper application of the penal law of the Church.  He is often spoken of with grateful affection by his former students at St. Paul University and is certainly well-regarded by any who have sought his counsel.

I have had the pleasure of participating in meetings with him and I have always been impressed by the way he shares his wisdom and knowledge of the law with a sense of dignity and humility, and with deep respect for the good of the Church and the good of each and every person who is served by its law.  It is obvious that he is inspired by the missionary spirit of the Oblates of Mary Immaculate and committed to the mission of promoting every method of serving God’s people that comes under the concept of law.

With gratitude and sincere respect, it is my privilege on behalf of the Board of Governors and the entire membership of the Canon Law Society of America to present the 2004 Role of Law Award to Reverend William H. Woestman of the Missionary Oblates of Mary Immaculate.

Next
Reverend Lawrence DiNardo: Competence, Conviction and Service in the Vineyard of the Lord
← See all 41 episodes of The Canon Law Society of America Podcast