Come fly with us through a history of New York City's largest airport, once known as Idlewild (for a former golf course) and called John F. Kennedy International Airport since 1964. Mayor Fiorello LaGuardia wanted a new and improved facility to relieve the pressure from that other Queens airport (you know, the one with his name on it), but a greater challenge faced developers of the Jamaica Bay project -- the coming of the jet age and the growth of commercial travel.
The solution for Idlewild was truly unique -- a series of vastly different and striking-looking terminals assigned to individual airlines. This arrangement certainly had its critics, but it has provided New York with some of the most inventive architecture found within its borders.
From stained glass to zodiac sculptures, from the out-of-this-world dramatics of the Pan Am WorldPort to the strangely lifting concrete masterpiece by Eero Saarinen, we take you on a tour of the original '60s terminals and the airport’s peculiar history.
With guest appearances by Robert Moses, Martin Scorsese, the Beatles and a pretty awesome dog named Brandy.
www.boweryboyspodcast.com 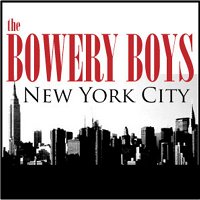