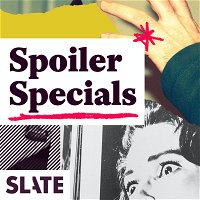 On the Spoiler Special podcast, Slate critics discuss movies, the occasional TV show, and, once in a blue moon, another podcast, in full spoiler-filled detail. This week, Slate’s movie critic Dana Stevens is joined by Rolling Stone’s chief TV critic and host of the popular podcast Too Long, Didn’t Watch, Alan Sepinwall to spoil the new Sopranos prequel film, The Many Saints of Newark.

The film follows a young Anthony Soprano, growing up in a very tumultuous era in Newark, N.J. Caught up in the changing times is the uncle he idolizes, Dickie Moltisanti, whose influence over his nephew will help shape the impressionable teenager into the all-powerful mob boss: Tony Soprano.

Note: As the title indicates, this podcast contains spoilers galore.

Dana Stevens is Slate’s movie critic. You can read her review here.

Alan Sepinwall is Rolling Stone’s chief TV critic and host of the popular podcast Too Long, Didn’t Watch. You can read his review here.

Previous
Shang-Chi and the Legend of the Ten Rings

Next
Midnight Mass
← See all 433 episodes of Slate's Spoiler Specials