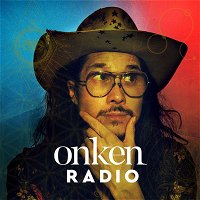 175: Benjamin Shine – Using Unconventional Tools For Art
55 minutes Posted Nov 19, 2019 at 8:00 pm.
0:00
55:51
Download MP3
Show notes
“It’s a material that is half not there and I find that fascinating.”
Hey everybody, welcome back to ONKEN RADIO (formerly NION Radio), the podcast where we explore the body, mind, and soul of the creative entrepreneur. It’s my goal to help you take your creativity, business, and life to the next level. I’m so glad you’re joining me on this journey!

For today’s episode, I talked with artist Benjamin Shine — he may not seem like a tutu guy, but he has a background in women’s wear and makes fantastic art with single pieces of tulle fabric. In addition to tulle, Benjamin uses other unconventional materials and tools, such as irons and fence metal, to make some stunning pieces.

Finding clarity from chaos, Benjamin Shine reached success in the art world by using gravity and the density of material to create form rather than still images. I brought Benjamin on the show today to talk about the pivot from his fashion career, his graveyard of old iron, his spiritual journey with art, and so much more.

Benjamin Shine is the perfect example of a Creative Alchemist — by using unconventional tools, excellent business strategy, and tying it all back to his spiritual experiences, he has made a career in the art world that truly stands out from the rest.

Without further ado, let’s dive into the interview.
Who Is Benjamin Shine?
Benjamin Shine is a multidisciplinary artist who is most known for his work using tulle, which centers on ideas of energy, impermanence, and the relationship between the spiritual and the superficial. In addition to having several of his works displayed around the world, Benjamin has collaborated with several celebrities and famous designers, including John Galliano.

After being encouraged to leave fashion school in his third year, Benjamin focused his efforts on creating two items of clothing from a single piece of fabric before going down the inventor-designer rabbit hole. Now, he’s creating revolutionary tulle portraits. If you haven’t seen his work, you need to go over to his Instagram right now @benjaminshinestudio. His work with tulle is absolutely breathtaking.

He has an amazing technique where he uses an iron and creates depth and shadows by fusing pieces of the tulle together onto a canvas. If you check out his Instagram, you can watch videos of this technique in more detail!

I met Benjamin’s wife, Danielle Shine, at an event a couple of months ago — she’s an amazing nutritionist, chef, and human being, and she connected me with her husband so I could interview him on the podcast. We talk about so much today, so make sure to listen to the full episode to get all the details. With that, let’s get started.
Pivoting From Fashion to Investor Design to Fabric Portraits
As I said above, Benjamin began his artistic career in fashion. He attended two universities — one in the U.K. and the other at St. Martins — and he specialized in women’s wear. At the time, he didn’t really know anything about fashion besides a tiny bit of work experience from when he was sixteen.
“When I got there, I sort of discovered that I really knew very little. … All these other students … knew all the designers. I really didn’t know how to serve. So I was starting right at the bottom. But I picked it up pretty quickly and I just loved working with fabric, which was a totally new medium. … I was like the art kid [who] was good at drawing and painting, but we were never taught to venture outside that … so it was a whole new medium.” - Benjamin Shine
After designing some t-shirts when he was 16, Benjamin saw that fashion was a potentially profitable career. In school, he learned very quickly and loved being able to experiment with new materials, such as tulle. It was in his third year of school that he developed an obsession with the fabric:
“By the third year,
This podcast uses Libsyn for stats, and dynamic audio. Learn more on this podcast's About tab.

Previous
174: How I Stay Motivated & Focused