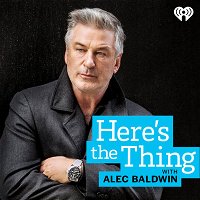 In 2013, Alec sat down with the late stage and screen veteran who, among many famous roles, played his mother Colleen Donaghy on 30 Rock. Stritch spoke to Alec about her transition from the Sacred Heart Convent and finishing school to finding herself in the New York theater classes sitting between Walter Matthau and Marlon Brando. She performed for nearly 70 years and throughout career, Stritch comments, "I was the funny kind of offbeat girl. I was never the romantic lead.”