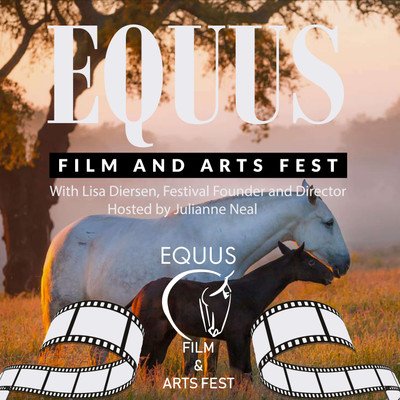 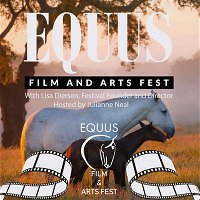 In this episode, Lisa and Julianne introduce listeners to artist Kody Bundy and filmmakers Karen Sailer and Charles Perry. The panel-style interview was recorded during the EQUUS Film and Arts Fest at the Kentucky Horse Park in December.

Artist Kody Bundy creates her artwork with knives and brushes. According to Kody, "Growing up on the rolling prairie of my fathers farm, I had a deep appreciation for horses.  When I wasn't spending time riding or just hanging out with them I was drawing them. After high school graduation I put away drawing and began my life working and training horses. During the Western Art Week in 2015 at Great Falls, MT I first observed a Scratchboard artist and was amazed by the detail she could achieve by using the tools she used to create her artwork. The panels I use are layered with white china clay and are airbrushed with either black India Ink or a choice of colored India Inks.  Then the  fun begins.  I use razor blades/ X-acta knives, fiberglass brushes and nibs to remove the ink to engrave my image on the panel.  Colored artwork is layered with ink using a paint brush. Imagine seeing a single blade of grass or a whisker in 3-D.  Because that is what it is, etched in clay."
www.kodybundy.com

Karen Sailer, born in 1962, grew up in Germany and has lived in Ibiza, Spain since 1995. When asked when she was 14, what she wanted to be, she replied: veterinarian, textile designer, landscape architect, writer and filmmaker. She studied veterinary medicine, was chief designer of a carpet company in Nepal and then became Ibiza‘s most successful landscape architect. As a modern medicine woman, who has learned from the great wisdom keepers of our earth, she has cultivated her gift of turning deserts into paradises into soul-rejuvenating work with people and horses. Karen Sailer has often shed skin and, with the journey back to her past life as a warrior in 16th century France, opened a new chapter in her eventful life. The publication of a 12-minute short film in February 2019 about her experience with the old equestrian figure and the decision to openly and authentically share her magical journey on social media has suddenly made her a public person, which has been breathlessly followed by thousands of people.
https://mmj.onesixdc.com/

Producer, director, and cinematographer Charles Perry creates films that explore race relations, political issues, and interpersonal perspectives. His current film, ‘The Black Cowboy’ takes you into the world of African-American history and culture that is little known. Most of us know the cowboy as a gun toting white man like John Wayne. But the Hollywood portrayal of the Wild West is a whitewashed version of reality. It is thought that, on some Texas trails, about 25% of cowboys were black.The Black Cowboy is a look at a little known chapter in the history of the United States. It is a story that illuminates the often overlooked people who contributed to the building of the ideal that is the American dream.
https://theblackcowboy.com

To learn more about Julianne and her partner Bruce Anderson, tune in to "Whinny Tales: Horse Stories, Pony Legends and Unicorn Yarns," the official podcast of Nature's View and The Marley Project. You can also visit www.naturesview.us or www.equusfilmfestivalcamden.com.
For more information about the festival or for links to the films and literature, visit equusfilmfestival.net. Follow us on social media at EQUUS Film Festival. To see the EQUUS films, visit www.filmfestivalflix.com

Next
Meet the Herd: Conversations with Cindy Galloway, Cindy Erkel and the Billy and Blaze Team
← See all 17 episodes of EQUUS Film and Arts Fest