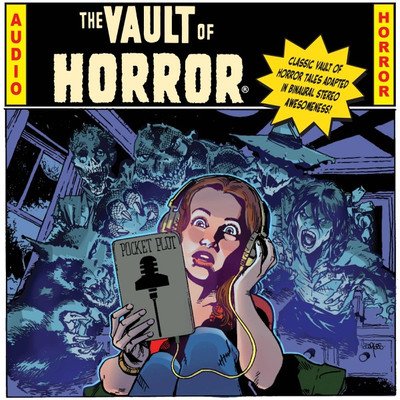 “Look, you guys want to hang out with him, that’s your business. But you know Reece Ramsay’s a borderline psycho and one day he’s gonna do something really stupid and I don’t mean trying to beat up a gym teacher.”

“The Grave Wager” Adapted by Lance Roger Axt from the story by Jack Kamen.

Two metalheads dare their friend to spend the night in a locked room with a dead body. They hire a homeless man to pose as the corpse. Oh, whatever could go wrong?

“Escape!” Adapted by Butch D’Ambrosio from the story by Al Feldstein.

Tony Flint has escaped from every lock-up he’s been incarcerated in. Now he’s in the most escape-proof correctional facility in existence, but he thinks he’s found a way out… via a coffin.

Adapted from issue #16 of “The Vault of Horror”. Visit us at www.pocketuniverseproductions.com and www.eccomics.com

Previous
THE VAULT OF HORROR, Episode 9