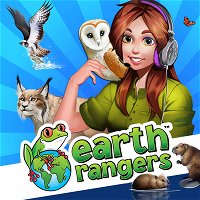 Remember last week I talked about arctic foxes, and how they have been disappearing from the southern edge of the tundra around the globe? It happens because arctic foxes lose their habitat and THAT happens because of climate change. Changes in global weather is causing the sea ice to shrink. It also changes the tundra because more and more plants and animal species from the south can invade further into the north so the tundra is becoming more like shrublands or woodlands. That’s bad news for the arctic foxes and other arctic animals because they need the sea ice and the tundra to survive!

My best friend, Sarah, actually makes a podcast about climate change called ‘The Big Melt’, and she made a specific episode on how climate change affects animals in the arctic, animals like arctic foxes and ringed seals.

Find out more about the show at www.bigmeltpodcast.com

Listen to more great kids and family shows at:

This podcast uses PRX for stats, and dynamic audio, and Podtrac for stats. Learn more on this podcast's About tab.
Popular Now In
Pets & Animals
#75 Previous
What Does the Arctic Fox Say? Next
Biodi-what?!-sity and an Enchanting Underwater Encounter
← See all 44 episodes of Earth Rangers