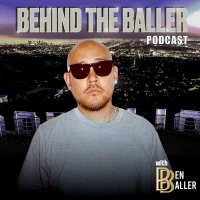 BBP Army we are you coming to you live from The Bay! Ben opens it up top by thanking Jeff Staple & HypeBeast for this opportunity, Seahawks losing to Cardinals & dealing with injuries, The upcoming showdown vs. 49ers & more.

You’ve heard the legend Jeff Staple on Behind The Baller Podcast with Ben Baller. Now hear Ben Baller on Business of HYPE.

Jeweler of the stars Ben Baller recounts his humbling rise from his moniker's hardwood origins to multi-millionaire status hot on the heels of retirement...if his entrepreneurial spirit doesn't spark yet another career metamorphosis, that is. Listen in and learn more about Ben's time as Dr. Dre's head of A&R, what led him to peddling drugs and sneakers, how he deals with fame, and being the mentor the younger generation of hustlers need.

As always, thank you for tuning into HYPEBEAST Radio and Business of HYPE. Please don't forget to rate, comment and subscribe to our other shows MIC/LINE, The Anthropology, The HYPE Report and HYPETALKS.

Then brings it back for the outro to discuss: Christmas presents & the kids, a Documentary recommendation, driving up to The Bay & having an anxiety attack, being in the bay all week, Merry Christmas & more.

Feel free to hit Jeff on Twitter, @jeffstaple, or via email at questions@businessofhype.com, and he may answer your question on a future episode. Make sure to also check out Behind the Baller Podcast with Ben Baller, available wherever you get your podcasts.

Behind the Baller Podcast on Spotify: https://open.spotify.com/show/6aNdkbamyMBZH0WbzhO0Kg

Behind the Baller Podcast on Apple: https://podcasts.apple.com/us/podcast/behind-the-baller-podcast-with-ben-baller/id1475680946?ign-mpt=uo%3D2

Ben Baller on Business of HYPE on anchor : https://anchor.fm/businessofhype/episodes/Ben-Baller-e294q9/a-a5en7q

Next
FLU GAME EP 41 - THIS HAS BEEN THE BEST DECADE OF MY LIFE: SNF Seahawks vs. 49ers, Stopping By The First Job, Answering Fan Questions & more
← See all 224 episodes of Behind The Baller Podcast with Ben Baller