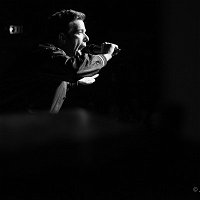 Today we welcome a special guest to the B&H Photography Podcast: actor and comedian Jeff Garlin.

Jeff Garlin is well-known as a stand-up comedian and, of course, as a star of the hit television shows, The Goldbergs and Curb Your Enthusiam. About fifteen years ago, he turned a love for photography, for the work of the masters—Alfred Eisenstadt, Jim Marshall, Mary Ellen Mark, to name a few—into his own photographic practice, and we are all the beneficiaries of his engaged eye.

In March, Garlin debuted his series, “A Big Bowl of Wonderful,” at the Leica Gallery Los Angeles, and we talk to him about how this series of portraits of his co-stars and friends in the television community—many taken on set or backstage—developed over a long curve, one founded in respect for the medium and applied with a simple stratagem: see something interesting and frame it in the most creative way possible. With that in mind, we talk about trusting your gut, not overthinking a shot, being comfortable with your subjects, but also about gaining the confidence to take photos, especially of those you know and respect.

Garlin also talks about his affinity for Leica, especially the M system, about the difference between actors and comedians, and talking photography with Jeff Bridges. We also ask him about his role as executive producer on the film, Finding Vivian Maier. This really is a photography lover’s conversation, summed up best by one of Garlin’s comments: “I’m taking a picture because it brings me joy.”  Join us for a great episode.